Now that Warner Bros. has confirmed that there will be a Superman/Batman (or Superman vs. Batman) movie, everyone has been asking the same question: who’s going to play the part of Bruce “Batman” Wayne? Ever since news broke of the “World’s Finest” (what the movie should be called) film coming out in 2015, fanboys have gone into a frenzy spouting out names of actors befitting the signature cowl of the the Caped Crusader. Instead of throwing my hat into that race, I’m here to ask a different (yet equally important) question. Who is the villain going to be? The bad guy (or guys) in a movie about the 2 most famous superheroes is a tricky subject. Not only do they have to be strong/smart enough to warrant the team-up of team-ups, they have to give the screenwriters something to build on for 2017’s Justice League movie. Here are a few of my picks who can do just that. 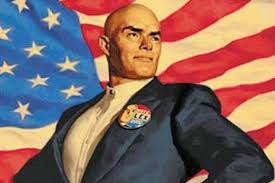 Let’s go ahead and get this one out of the way since it’s pretty much a given that Ol’ Chrome Dome will be in the movie. Not only was Luthor hinted at in Man of Steel, him being the villain is perfectly logical. Lex has always been one to start trouble in Metropolis, and he always dreams big. Having the CEO of Lexcorp hatching some Machiavellian plot upon the unsuspecting city (complete with plenty of minions/cohorts) is probably the easiest way to bring DC’s 2 biggest guns together. As for building towards the JL movie, we could always have a defeated Lex forming the Legion of Doom/Secret Society/Injustice League.

Assuming Lexy-Wexy is a lock for the film, there is a ready made storyline from the hit show Superman:the Animated Series in which Lex hires the “Clown Prince of Crime” to off the Man of Steel. This of course prompts Batman to follow his arch-nemesis to Metropolis and help Superman. Now pulling this off would indeed be difficult (especially since the general public still views Heath Ledger as the Joker), but the payoff could be worth it. For one, Harley Quinn needs to be adapted to the big screen (and that was the sound of 1,000 fanboy erections hitting their keyboards) and for this scene from the cartoon series. For those of you who can’t (or are too lazy to) follow that link, that is a scene where Superman uses his x-ray vision to discern Batman’s identity only to go home later that night and find a Bat-tracer on his outfit. When he looks out across the rooftops, lo and behold, there’s Bats with a pair and binoculars and a smug grin. Classic. All-in-all having the Joker as an antagonist does seem unlikely (especially since Chris Nolan will have his hand in the film) but it would make for great cinema.

Now for the one villain that every comic fan wants to see… Doomsday. In the comics “Big n’ Horny” here leveled Metropolis, ate through the entire Justice League, and murdered the Son of Krypton in one of the biggest events in comics history. Not only would a visit from Doomie warrant a team-up of the “World’s Finest,” it could very well be the basis of the JL movie itself (though there’s another villain who should get that right… but more on that later). As for Doomsday, his appearance in the film would all but guarantee high ticket sales as well as seriously push the boundaries on a PG-13 rating. With modern CGI they could make this beast look incredible and he’d be able to unleash an ass-whippin’ on Supes the likes of which would make Zod jealous. They could even have DD “kill” Superman but be just weakened enough that Batman can finish him off. Then in a post-credits scene we see that Supes somehow survived and boom… there’s your set up for the Justice League movie.

Now this entry may lose all but the true fanboys among you, and for that I apologize, but unless you’ve read the comics or watched the cartoons you’re probably not familiar with Intergang. In an effort to save time I will keep this short… Long plagued by Superman’s brand of justice, the gangs of Metropolis decided to band together into a “supergang” under the auspices of Bruno “Ugly” Mannheim. At first, they had as little success against the Man of Steel as they did before, that is until they caught the eye of a certain evil emperor. Now, armed with advanced weaponry from their dark benefactor, Intergang has become more than just a minor annoyance to the citizens of Metropolis. If that’s not informative enough for you, here’s a link to their Wikipedia entry. Anyways, Bruno and the boys would be the perfect villains for the Superman/Batman movie for several reasons. First, they would be a big enough of a threat that Supes could use the help of the Dark Knight, but not so big that they’d feel more at place as the main antagonists in the Justice League film (see the Doomsday entry above). Secondly, with their many Apokoliptic weapons, they could provide a variety of challenges that showcase both Supes’ and Bats’ strengths and weaknesses. Lastly (but definitely not leastly), they would be the perfect build to the perfect villain for the JL movie… Darkseid. In a move similar to The Avengers, after Intergang has been thoroughly beaten and the day has been saved, we cut to a scene where the “Dark One” himself is reported of the situation and glowers in rage (complete with Omega Beam flaming eyes). Yea, maybe it could be misconstrued as a knock-off of Thanos’ post-credits cameo, but those complaints are going to be thrown at this film anyways (you know because it’s a movie about a bunch of different heroes forming a super-supergroup). At least Darkseid appearing in a Justice League movie would be staying true to the comics. Whereas having Thanos popping up in an Avengers movie makes about as much sense as Quicksilver and Scarlet Witch getting on the team before Ant-Man and the Wasp, but I digress.

Anyways, there’s my list. I hope you’ve all enjoyed it and I look forward to your comments and suggestions. Regardless of who the villain or villains may be, I am eagerly looking forward to the onscreen debut of the World’s Finest (I’m sticking to that as the proper title to the film). See you next time true believers.