It was inside the Death Star – the corridor to the detention blocks. The first images from the original Star Wars trilogy I saw were the rescue of Princess Leia. I had no idea who Han and Luke were, and not because they were disguised as Storm Troopers. They entered the command room with a prisoner transfer and suddenly there was a firefight. The image of Han hugging the long corridor as what seemed like an endless horde of Stormtroopers approached has since been permanently seared into my mind.

I was at my Aunt and Uncle’s house playing with my cousin when we brought our toys into the living room. My Uncle’s VHS copy of Star Wars was playing in the background. I stopped playing and became completely hypnotized. My cousin who had seen the movie before was annoyed, but I could not look away.

Shortly after the dive into the garbage chute my father convinced me to play with my cousin, and that we could watch the film at home from the beginning. I agreed, and went off again with my cousin. I would watch the movie the next day in the late afternoon. I don’t remember much of that showing other than that I was completely transfixed. Watching the movie at that young age and being so captivated by it influenced me, though I do not know how much. I was ignorant of the sequels at the time, but my Dad told me there was more, and we would watch them soon.

I would later watch Empire and Jedi on back-to-back nights, after my Dad recorded them off of a network showing. When it was an Empire day I remember different cousins visiting on the promise of watching it that night. One of the activities we did that day was to visit the local flea market. It was here that we stumbled upon a huge cache of Return of the Jedi figures. I had enough money for two and purchased Han Solo with his Endor Coat, though I had not yet seen the movie, as well as a Chewbacca toy. My mother purchased a few Ewoks when I wasn’t looking which she would spring on me later. This was a different time; it was the late 1980’s and Star Wars figures were discontinued.  They could only be found at flea markets and antique stores, so when I had a toy purchase coming I often asked to go to an antique store. I was hipster vintage before I could even contemplate growing an obnoxious beard. 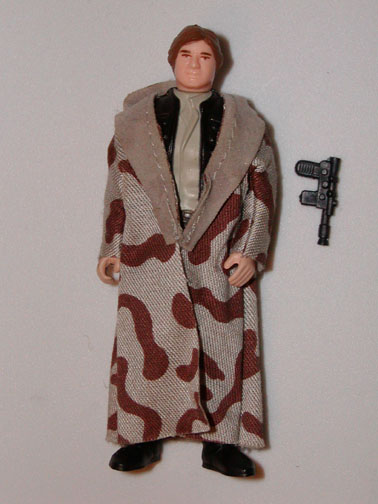 That night with three of my cousins we watched The Empire Strikes Back. I vividly remember the Yoda reveal as truly surprising, as well as Darth Vader proclaiming his paternity. The movie blew our collective minds, and the next night we were promised Return of the Jedi.  The next day we set up elaborate adventures with our newfound figures, and all of the old ones. We bided our time until dinner, because after dinner it was movie time. While Empire has long been my favorite film, at that time Jedi was. I relished Han’s rescue from Jabba, and was the perfect age for the Ewoks. The next day when my Aunt and Cousins left my mother gave me a Wicket figure and I was set for hours afterward. I now had Han, Chewie, and Wicket as well as my own copies of Empire and Jedi.

My Star Wars collection would only grow from there!

M.R. Gott is typing these words next to a four foot tall Darth Vader figure