Trick or treat! Oh, wait! Okay so Halloween is over but doesn’t mean you still can’t have a bit of Halloween fun.

For those of you that have not seen Trick ‘r Treat it’s the first comic book/film that Michael Dougherty (The director and writer) has done, and according to IMDB, the first film is about:

“Five interwoven stories that occur on Halloween: An everyday high school principal has a secret life as a serial killer; a college virgin might have just met the guy for her; a group of teenagers pull a mean prank; a woman who loathes the night has to contend with her holiday-obsessed husband; and a mean old man meets his match with a demonic, supernatural trick-or-treater.”

Now Trick ‘r Treat: Days of the Dead is actually the sequel to this iconic film. This is actually a comic book though, but the director, Michael Doughtery plans to make this book into a film like he had done with the first movie; which I’m excited but a bit nervous about. It’s always a scary transition to go from book to film in anything, but I have faith. He did it so well the first time. 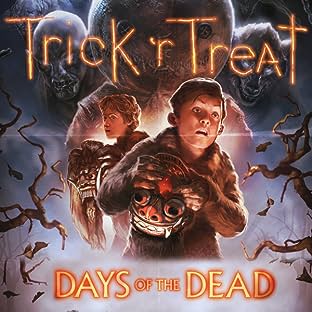 In this one we are supposed to learn a little more of the likable but slightly daunting (of the) Sam creature. This one actually has stories told that are in the past this time instead of the present.

This comic book I would have to say is brilliantly written. According to the comic book description by Legendary Pictures and Mr. Dougherty himself.

“It goes on to talk about Halloween history as they tell four chilling stories. Discover old –world lovers whose romance takes a chilling turn and Western pioneers who discover the dark side of the frontier. Travel to the 1950’s Los Angeles for a tale of pure horror noir and into the heart of small-town America to see some pranksters taught a lesson they’ll never forget.”

This comic was more of an origin story or background if you will of what was supposed to be about Sam. If you have read/seen the first Trick ‘r Treat you know there is this sort of adorable and mysterious creature called Sam that you see in every mini story but they don’t elaborate too much on Sam once again in this comic unfortunately. Isn’t he cute? Kind of? Not even a little? Just don’t think of him as a dark creature that could possibly kill you if you don’t follow the rules. How about now? All right, well I give up.

As we read along in this book we do learn a few things though. Sam seems to be mentioned as some form of spirit like creature that sort of helps a more powerful entity restore order, the writers would show him as a doll that will protect you from harm, or someone you can see in a vision. He is seen as neither good nor bad, and someone who might possibly even work for death?

Personally, I didn’t like how the ending was. The stories are sort of everywhere and they don’t really have a point shall we say. Even though the stories are good, I can’t help but compare it to the film a little bit. These stories didn’t quite tie into each other in the end like Michael Dougherty had done with the first film; which was slightly disappointing. 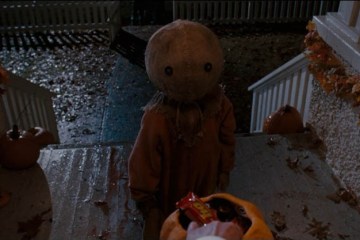 Not to mention, I’m not sure if they want to keep the mystery to it or not, but it still isn’t explained WHAT exactly Sam is, but giving a bit of mystery to Sam might not be a bad idea. After all that’s what makes him pretty creepy, well, besides the killing part of course.

The comic overall as a comic book was pretty good. The stories you delve yourself in were brilliant, the only down fall was there was no purpose to the stories that would somehow connect in the end.

The comic book if we compared it to the film, is what made this comic pretty good in my opinion but I was still a bit disappointed. Yes, the drawings and pictures were brilliant, and the mini stories were well written. The big thing for me is again, how the stories in the end did not end up tying itself together.

Nonetheless, it was nice to learn just a little bit more about Sam and what might his role be in that world.

One thing we know for sure about Sam is that,

“Wherever fear lies, Sam will be waiting.”

7.5
+I love the overall design. +The mini stories were attention grabbing +Entertaining -There was no point to the stories (It didn't tie in together) -Still don't know what Sam is.