My Little Pony: Friendship is Magic “The Hooffields and McColts” Review

As we inch closer to the season finale, it makes sense that the plot-important episodes are returning. The last two weeks featured simple slice of life stories. There’s of course nothing wrong with that, but a plot bringing back the Cutie Map was welcome. This past week we had Twilight teaming up with Fluttershy to solve a friendship problem. The two have never been in a Brave and the Bold setting, so this was a treat in concept. It’s fun to think how Twilight was trying to get Fluttershy to face her fears in the first season and now they can have an adventure as equals. Sadly, much of this episode is on the mediocre side.

Princess Twilight and Fluttershy are called by the map to settle a dispute between two feuding families who can’t even remember why they are fighting.

I knew something was off when Twilight appeared rather more frantic than usual. It’s of course normal for her to be overly excited. But from that point on she’s written as almost having a superficial happiness. In one scene which pretty much exemplifies this rather poor portrayal of her, she after reading some lines from a book asks Fluttershy, “Ready to go home?” It came off as just strange. Twilight is usually very down-to-earth, but here it’s completely the opposite. Ironically, Fluttershy acts more like Twilight throughout the story. It was great seeing Fluttershy in this manner after her rather bad portrayal two weeks ago in “Scare Master.” 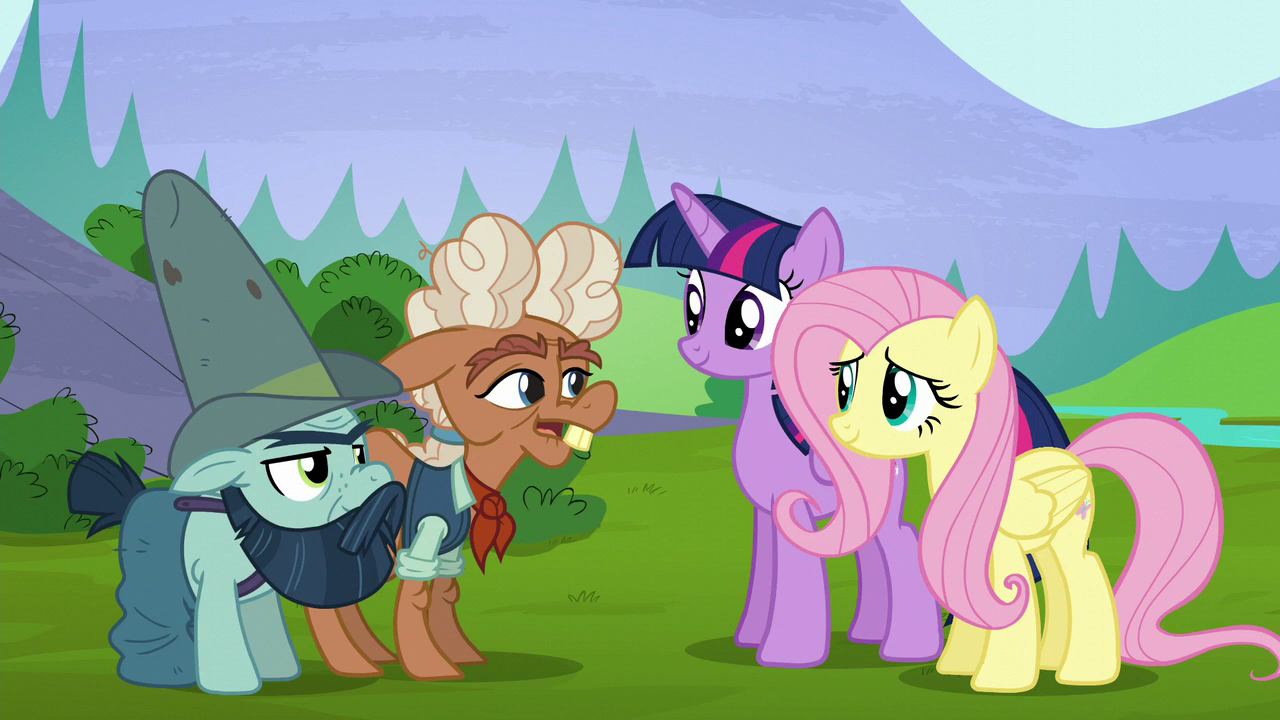 I will give credit to Twilight for one standout line: “Forgiveness is an investment in happiness.” That’s the one good line writers Joanna Lewis and Kristine Songco delivered. If the story was better, Twilight’s portrayal could have been slightly passable. But the plot is just really bad. So we have these two warring neighbors. Nothing wrong with that for a story, but the dialogue is just so bad and the way things progress just feels mindless. None of the new characters are anything resembling good. In fact, I’m tempted to say this is meant to be a satire, because it watches like one. It doesn’t help that the cake part was such an obvious, cringe-worthy ploy.

Overall, “The Hooffields and McColts” is definitely a disappointment. I was really looking forward to this one because it stars my two favorite characters. Twilight is written very off. It would help if the story was good, but it’s just really silly and almost as groan-worthy as the Yaks in “Party Pooped.” At the very least, this is perhaps Fluttershy’s best appearance in the season yet. The end message is good and nicely summed up: friendship is more important than winning an argument. If only the road there was almost as good.