One of the most interesting aspects about MLP is how drastically different episodes can be. For example, two weeks ago we had the immensely emotional, plot important “Crusaders of the Lost Mark” and the following week we had the completely comedic “The One Where Pinkie Pie Knows.” This week returns to the more important side of things, being sort of a sequel to the Season 4 episode “Pinkie Apple Pie.” In that episode the story posed an intriguing question: what if Applejack and Pinkie Pie were cousins? Sadly the story leaves it up in the air. Why? The world may never know. The story today continues to poke fun at that question. It’s also important because we get to see Pinkie’s family in the present for the first time. There are some extremes, but overall it’s definitely far better than last week’s.

Applejack is excited to celebrate Hearthswarming Eve with Pinkie Pie’s family, but soon discovers that the Pies have very different ways of enjoying the holiday at their Rock Farm.

Hearth’s Warming Eve always make for a nice setting. After an intro with Twilight (where her present to Spike is a book…really?) we dive into the core of the story. As seen in “Pinkie Apple Pie,” Applejack and Pinkie make for a nice combo. It’s always fun when they’re on screen and sharing dialogue together. Now, perhaps the most vital aspect of the episode is seeing Pinkie Pie’s family in real time. The show has been rather reluctant in showcasing family members of the Mane 6. We’ve barely seen Twilight’s parents, Rarity’s only appeared once, Rainbow Dash’s only in a flashback, and we’ve never seen any of Fluttershy’s. So to see the Pies all together was a treat in concept. The problem is that almost of them are hostile or written too strangely. 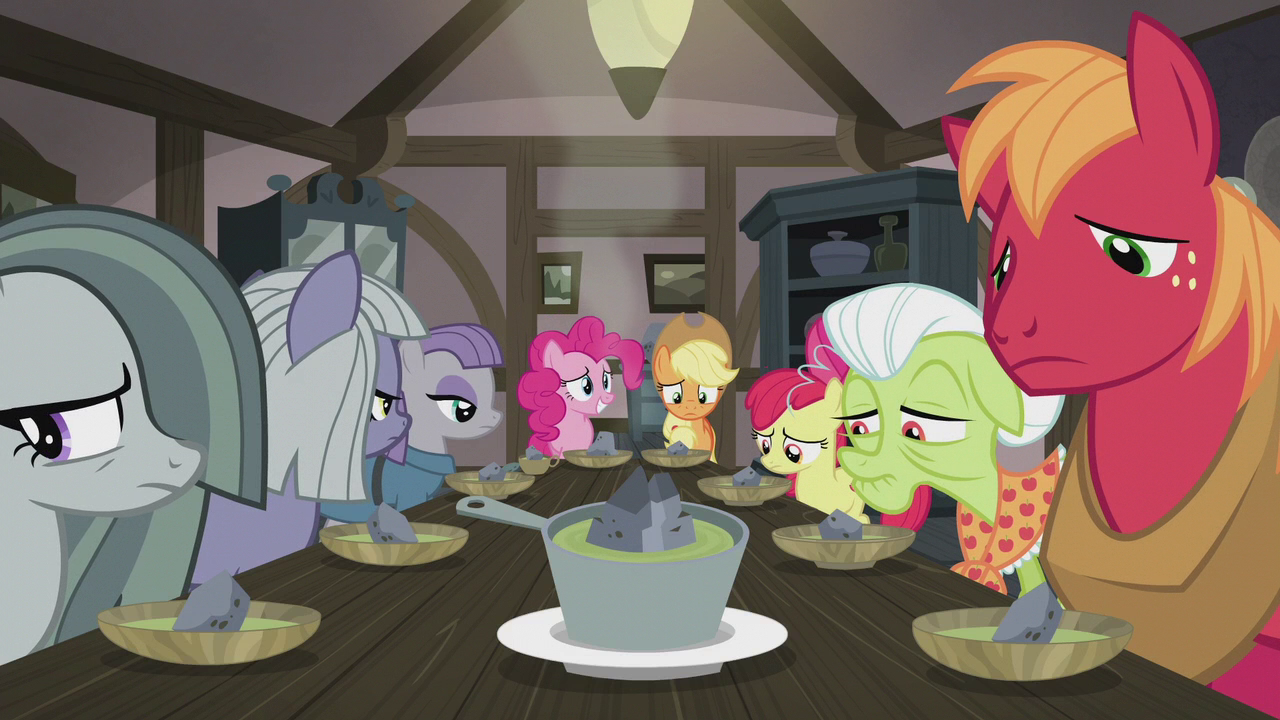 There’s one main message here. At first I thought one was going to be that some family members (or in this case hypothetical family members) just won’t get along no matter how hard you try. That point was dropped by the end. So instead we have the message that everyone has their traditions and we shouldn’t think others are inferior. This isn’t bad, but the thing is that the story goes out of its way to showcase how boring and sad the traditions of the Pies are. Heck, even Pinkie admits they don’t sound fun when Applejack says it. Are you telling me they never get presents because one can’t find them in a scavenger hunt? No wonder Limestone Pie is always so annoyed. If that wasn’t bad enough, how can rock soup be a thing? That was so ridiculous I almost had to question what I was watching.

There are nice moments sprinkled throughout, of course. Nick Confalone has a solid handle on Applejack’s and Pinkie Pie’s characters. One of my personal favorite scenes is when Apple Bloom makes note that the Pies have their own traditions. I’m really glad she said this and the story not going the more generic route of the Apples realizing that everyone has their own traditions for the first time. Maud Pie’s epic one-liners always steal the show. The ending is also nice and a great way to end a Christmas-themed story. If only Pinkie’s family could be a little more realistic.

Overall, a solid episode. I’m always big fan of Hearth’s Warming Eve in the show. (I find it strange that this wasn’t saved for a little more later in the year.) The concept is nice, and I liked how some of the characters interact near the end. But, there are just quite a few extremes which hurt the message a bit. Rock soup? Really? Pinkie’s family ended up being more annoying than anything. Still, not a bad adventure.