Up Next on ARROW: Relationships and Developments

WARNING: SPOILERS FOR “ARROW” AHEAD.

Returning next week after a two-week hiatus the hit CW television show, Arrow, last left us hanging in terms of how the recent additions of Sara Lance and Roy Harper to Team Arrow are going to play out. And next week’s episode, “Time of Death” is very much going to be about dealing with Sara’s return to Starling City.

Right now, the core team of Oliver Queen, John Diggle and Felicity Smoak is joined by Roy Harper and Sara Lance. When asked what he thought of the team’s growing roster, Stephen Amell said:

It’s not a very big cave. [But] there’s myself, Diggle and Felicity – and everybody else for the moment is just kind of a visitor.

One character that almost certainly doesn’t mesh well with the rest of Team Arrow is Roy Harper who is “tired of not being delegated the right amount of work – he’s almost still being treated like an errand boy” says Colton Haynes (Roy Harper). 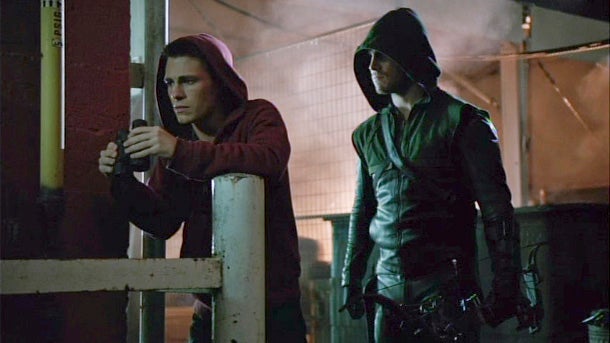 Roy Harper and The Arrow.

This doesn’t come as much of a surprise to those who have been following Roy’s storyline who at this point isn’t performing very well in his training sessions with Oliver.

“Time of Death” isn’t going to focus on Roy so much as it is going to focus on Felicity Smoak who has to deal with the arrival of the Clock King – a villain who can finally match her in the hacking department.

According to executive producer, Marc Gugenheim, “This episode deals with Felicity’s reaction to the events and what it’s like to have Sara in the cave, in the Arrow lair, with the rest of the team and does Felicity still have a role to play either in Oliver’s life or in the Arrow’s mission”.

Felicity Smoak played by Emily Bett Rickards is without a doubt the show’s breakout star, is going to get a lot of love in episodes to come, both in terms of developing her relationship with Oliver and in fleshing out her backstory.

“There are two massive things that are going to happen towards the end of the season that you heard in that [Felicity’s speech about her parents] speech that will pay off,” said executive producer, Andrew Kriesberg.

Furthermore, on the Oliver-Felicity front, Sara and Oliver’s rekindled relationship has created more complications for Oliver and Felicity’s relationship and added another weight to Oliver’s pile of hypocritical lies, given the fact that he told Felicity he can’t be in a relationship with someone he could actually genuinely care about.

Fans will just have to wait and see what the show has in store for Felicity and so far it’s looking quite good, questions about the direction of Felicity and Oliver’s relationship will be answered in addition to Felicity getting more of her own personal development separate from Oliver.

Felicity Smoak is just going to have to figure things out for herself in the episodes to come.