The development process of Deadpool has become the stuff of cinema legend, and it is indeed an inspiring one. The perseverance of star Ryan Reynolds, writers Rhett Reese and Paul Wernick and director Tim Miller to get this movie made is something which is almost non-existent in the rest of Hollywood. They faced dozens of denials from the studio heads at Fox, a terrible appearance in X-Men Origins: Wolverine, a script leak, and the movie was finally greenlit through completely bizarre means – a footage leak, which in any other circumstances would have been the final nail in the coffin. Not for the Merc with a Mouth, however.

You’re probably aware by now that the long road to getting this movie made has massively paid off. It’s received glowing reviews (84% ‘fresh’ on Rotten Tomatoes and an ‘A’ CinemaScore) and has broken a bazillion box office records with $132m over the three-day weekend, $150m over four days, and $300m globally.

For an R-rated, low-budget superhero movie with a history of being told it would bomb, starring characters nobody has ever heard of, led by an antihero who makes jokes out of torture and killing innocent people, that’s fucking incredible.

So, that’s all wonderful and awesome, but what’s the official UTF-branded take on the movie? Continue on, dear reader, and thou shall discover.

The biggest takeaway from this movie is how refreshingly original it is. The tropes involved are all standard – so much so that they’re parodied in the opening credits – however the execution, tone, dialogue and characters are all so wildly different from what we’ve come to expect from blockbuster filmmaking that you’ll probably leave thinking, “what the fuck did I just witness?”

The non-linear structure certainly aids this; the movie repeatedly bounces back-and-forth between the past and present, occasionally confusingly, however it fits with the innate wackiness of the property. It’s also used as a character development tool, to better effect than is usually achieved. The tricky thing with Deadpool is that, in any other narrative, a backstory as tragic as his would result in the reversal of his condition and conquest of those who imposed it on him. Wade would be cured of his immortality and get his pretty skin back, and Ajax would be castrated and tortured and waterboarded, amongst other things.

However, Deadpool’s life is not one of luck (there’s even a quip about this when he finds out about his cancer, but I sadly can’t remember it); it’s impossible to cure him, so he’s doomed to live on forever as a hated, deformed, mostly unlovable outsider. Just think about it. That’s horrific.

Yet at the same time, he’s so fun and hilarious to watch that you don’t even consider him being a tortured soul. By setting the movie up with Deadpool already being Deadpool – murderous, fourth-wall-breaking and insane – we fall in love with him, and when we later learn how royally fucked up he is we see him in an entirely different light. That journey could still have been achieved with a linear structure, but it would have been conventional, and that’s not what this movie wants.

It’s likely this all would have fallen flat on its face if anyone but Ryan Reynolds had been playing him. His love of the character and immense hard work to get this off the ground all shone brightly in his performance, which was confident, charming, sweet and, of course, outrageous. The sheer range present in Reynolds’ Wade Wilson cements him as a great leading man – even if he’s been plagued by a string of stinkers.

The performances are all pretty great. Morena Baccarin is seductive, hilarious and sweet as Vanessa; you truly get the sense that she and Wade have a strong, loving relationship which can overcome any mean ol’ British villain. Speaking of British villains, while Ed Skrein doesn’t exactly have a three-dimensional character to play around with, he makes us absolutely fucking hate him – which was entirely the point, so it’s alright. Deadpool doesn’t need anything beyond a massive bastard for its bad guy, because the main attraction is Deadpool himself. Character development is important, however it’s just relegated to the two leads.

T.J. Miller was pretty hilarious and fun as Weasel. There was a strong bromance between he and Wade, and even though they shared a lot of scenes together I felt as if their relationship wasn’t exploited enough. There could have been a strong emotional link between them but it feels like it comes out of left-field; he’s just his bartender, after all.

Not that that limits great friendships.

This is part of a wider problem with the movie; because so much attention goes to Deadpool, be it his character development or commanding every scene he’s in, all the other characters bar Vanessa feel short-changed. Colossus and Negasonic Teenage Warhead are pretty much just around for comic relief, Angel Dust is the blank muscle and Blind Al only gets one scene. That could be down to the running time (it’s only 108 minutes) and/or the breezy plot, but I wanted to see much more of these characters than what we got, and hopefully next time around they play a more integral part in the narrative. On one hand, I suppose that means they resonated with me, but I still think they would have resonated even more if they had more stuff to do. Let’s just get this one out the way: this movie is fucking hilarious and incredibly fun. If you don’t like a particular joke (the crude humour, while funny, all got very same-y after a while) then there’ll certainly be another one just around the corner for you to love (“McAvoy or Stewart? I always get those two mixed up”). Reynolds delivers the lines with pitch-perfect accuracy and plants the audience on their edge of their seats, waiting for the next moment to heave with laughter – mine certainly was. One of the reasons why it took so long to be greenlit is because of how singular the audience (theoretically) is; it would only appeal to “teenagers and young men” because of its raunchy humour – and one of those demographics wouldn’t have even been allowed in. Funnily enough, while the jokes are definitely crude and controversial, there’s something in there for all tastes.

Even aside from the jokes, the movie is sheer fun to watch and zooms by so fast that it’s over before you know it. The budget constraints ended up massively aiding Deadpool; rather than dominating the frame with explosions galore (although those were still present), director Tim Miller had to get creative with the action sequences and place emphasis on humour and character. Spelling out Francis in dead bodies, Angel Dust making short work of Colossus, Deadpool’s playful banter with Ajax’s men at the beginning – it all massively improved the experience. The final action scene was particularly dynamic and large in scope (that was totally a helicarrier); NTW blasting Deadpool into the air on a large plate of shrapnel was definitely a highlight.

This was all expected, but we’d all be lying if we said that there wasn’t any worry about whether the filmmakers had gone overboard with the wacky jokes and visuals at the expense of a good movie. Fortunately, they achieved the perfect balance and have been rewarded with $300m in a few days. Will they be able to keep it up with the sequel? I really hope so. I’m already looking forward to the opening scene where Deadpool makes fun of the Fox execs who kept refusing to greenlight the movie. 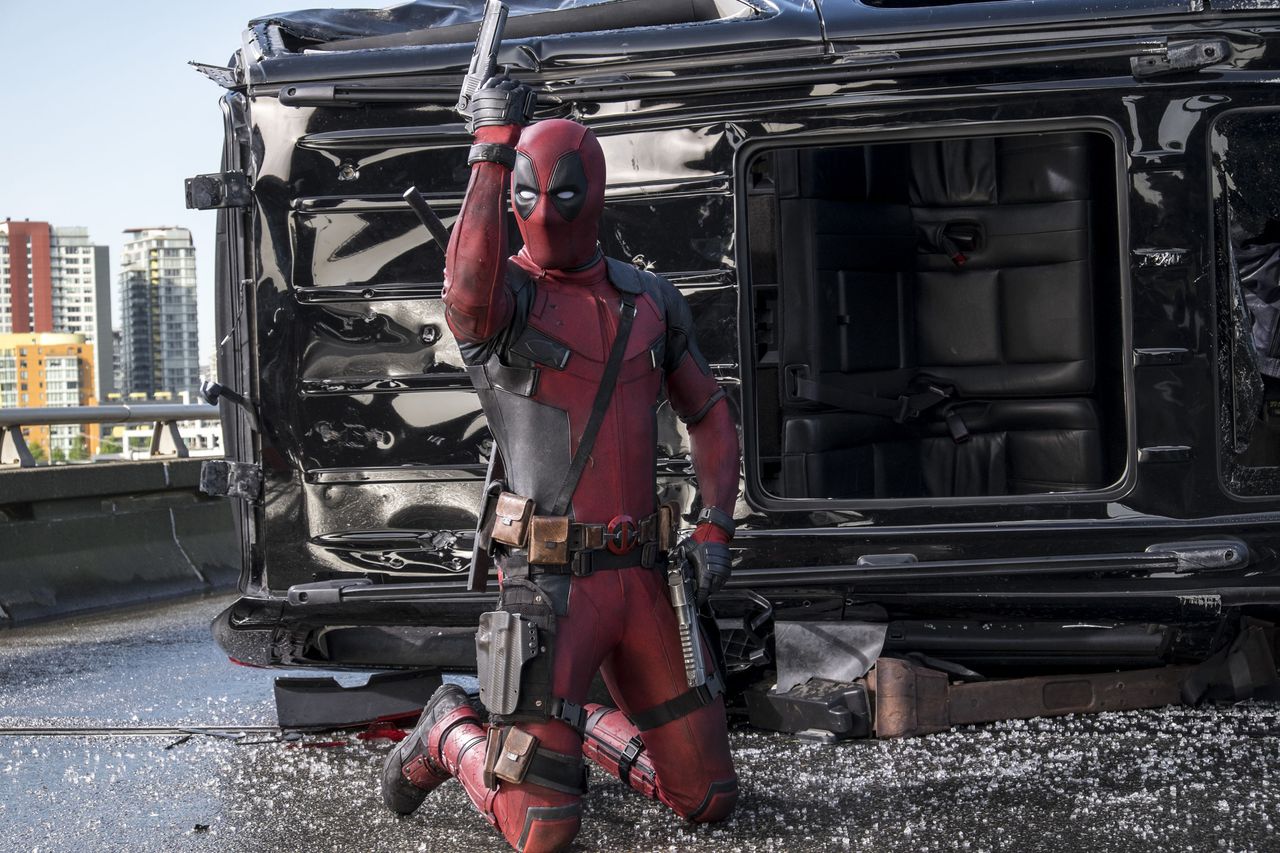 All in all, Deadpool is an excellently original romp with very little to dislike about it. While this certainly wasn’t the first R-rated superhero comedy, it’s the first to feel truly original and revolutionary – which it will be. I feel like it’ll be hard to watch most of the future Marvel movies (and probably DC’s too) without feeling a sense of disdain, because they’ll inevitably be playing to a formula which Deadpool has just pissed all over. How will it change the superhero genre? Time will tell, and I have a sneaking suspicion that it won’t be for the better.

But that’s a debate for another day. For now, let’s just enjoy the fact that fucking Deadpool is an absolute monster hit and is already changing the game up. Lord knows we needed it.