SUPERFANS IN THE FORTRESS: Anj Talks SUPERGIRL and Comics History

Superfans in the Fortress continues, this time with Anj from Supergirl Comicbox Commentary, a blog focusing on Supergirl, comics history and pretty much anything related to the Superfamily. Kara Zor-El’s cousin gets a lot of attention from the comic book community, but she rarely has a space of her own to truly be herself in – Comicbox Commentary is one of those spaces.

In this interview, Unleash The Fanboy takes advantage of Anj’s knowledge and appreciation of Superfamily history so that we can better understand why certain things are the way they are.

Helen Slater as Supergirl from Supergirl: The Movie

When and how did you start this blog?

Back in 2006, I decided I wanted to start blogging as a creative outlet for me. I read comics and wanted to talk about them but didn’t have a forum so I thought I would make one. At first I thought it would be a global site, talking primarily comics but also TV, movies, etc. That lack of focus led to lack of blogging so I decided to focus on Supergirl and ultimately the super-family, Legion, etc.

The word “Supergirl” appears more than 140 times just in your homepage. Why Supergirl?

I get asked that question so often I actually have a post called ‘Why Supergirl?’ [on my blog].

The short answer is that I love Superman, his power set, his ethics, his near perfection. But as a kid I could aspire to be Superman but I couldn’t really relate. I was hardly perfect, struggled to do what was right sometimes, and was still learning my place in the world. Supergirl had the all the same powers as Superman. She had the same aspiration to be like Superman, but she wasn’t perfect. She had more passion about her missions, and seemed to be finding herself. I could completely relate to that. So she became my favorite. 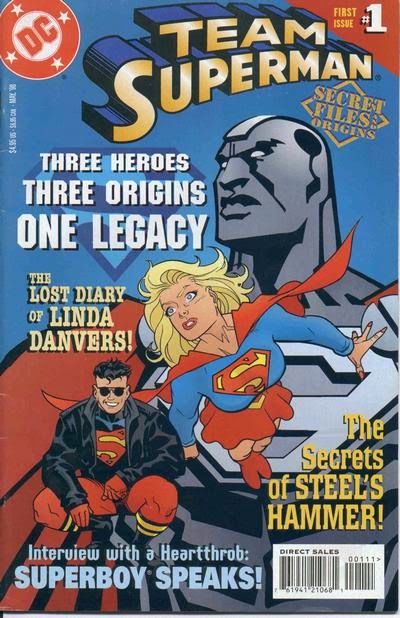 If Superman is about hope and inspiring people to greatness, what is Supergirl? Resilience?

I think of Supergirl as being on the hero’s journey. She is striving to be better. She is optimistic and bright. She sees the good in everyone. She is passionate about defeating injustice. She loves her job. She can be fierce when she needs to be. It is hard to encapsulate that into one word.

Maybe that means resilient. But for me she represents striving to do what’s right.

You express a lot of criticism about the changes the New 52 has brought to Superfamily canon. What is it about the New 52’s universe that you believe “doesn’t get it”?

I think we live in a cynical world these days where people look out for themselves. That flies in the face of ‘classic’ Superman and Supergirl, people with great powers who don’t use them to cash in and instead use them selflessly.

Unfortunately comics are a reflection of our times. Would people believe that anyone with the powers of a Kryptonian wouldn’t live the life of a rock star or be dismissive of others? So Superman is distant and aloof. He isn’t a mentor for either Supergirl or Superboy. He isn’t trusted by other heroes, the military, or people. You can’t be an inspiration if people fear you. So that seems completely wrong. 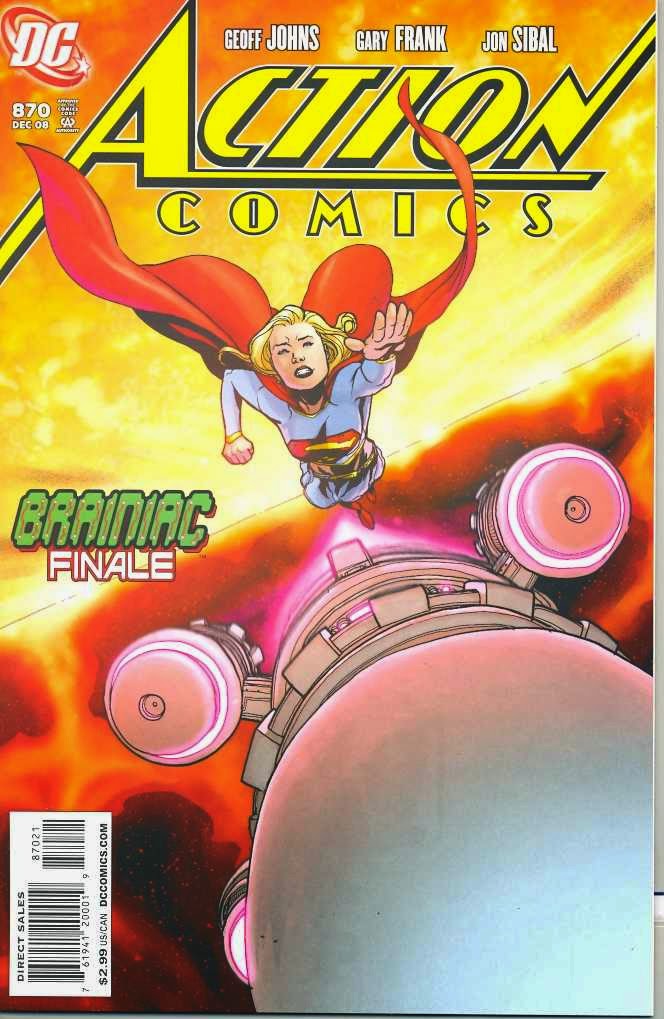 Similarly, (much like with the Loeb era), DC made Supergirl a bitter, whiny, disaffected loner. She is angry at her cousin. She is angry at Earth. She wants to be alone. She doesn’t want friends. All the optimism and selflessness and embracing of Earth and its people, of wanting to help that we saw in earlier incarnations … it all went away in the New 52. Perhaps more irritating is that DC tried that take in the last incarnation of Supergirl. It failed then too, and the character was completely rehabilitated and improved by Sterling Gates, Jamal Igle, and others.

You can create great stories about heroes in a cynical world, showing they can still inspire people and get them to look past their cynicism. But DC doesn’t seem to want to go that way.

Do you have any future plans for Comicbox Commentary? Any new directions that will CHANGE THE COMICBOX COMMENTARY UNIVERSE TO NEVER BE THE SAME AGAIN?

I am in a bit of a groove of reviews of new comics, timely looks back at older back issues, sales/solicit reviews, and commission/memorabilia stuff. That said, I am always eager for a new idea for the site. Any ideas? 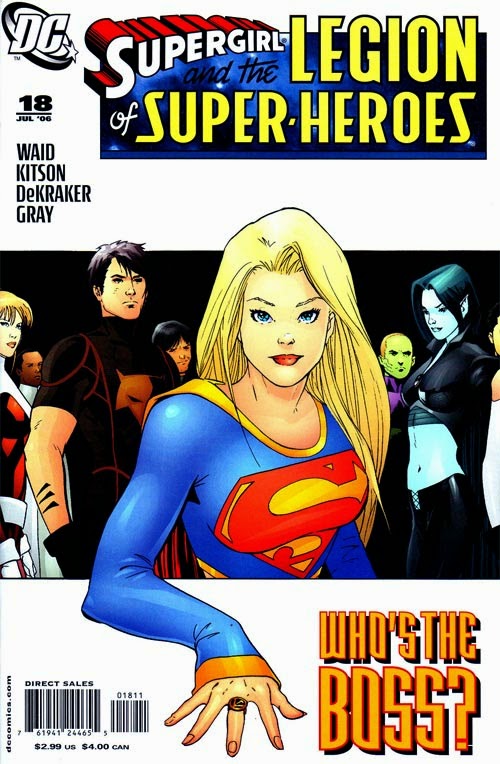 One thing that is really important to the Superfamily books is the vibrant and diverse supporting cast. This aspect never seemed more important than today when the Super-books lack a real supporting cast. So what is your take on this issue and how do you think it has shaped the characters of Supergirl/Superman/Superboy, etc. over the years?

I think a supporting cast is a crucial part of any comic book, especially a single character books (as opposed to a team book). It is hard to sustain stories with just one character. A supporting cast helps make characters three dimensional; they act as sounding boards or foils or even plot points.

Think of Superman – Lois Lane, Lana Lang, Perry White, Jimmy Olsen, Inspector Henderson, etc – those characters are an important part of his mythos, bolstering his stories and starring in their own. 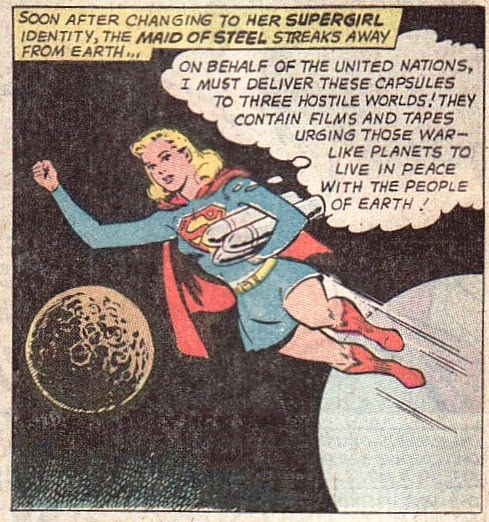 As for Supergirl, early on she didn’t have much outside of her earliest romantic options: Jerro, Brainiac 5, and Dick Malverne and maybe her adopted parents. The next we saw a strong supporting cast was in the Daring New Adventures of Supergirl in the early 80s. There she had friends, housemates, and classmates.

Recently, you saw Sterling Gates really work on this bringing in Lana Lang, Thara, Cat Grant, Inspector Henderson, and even Jimmy Olsen. All those characters help shape who Supergirl is during those times. Without Cat’s antagonism, Lana’s support, or Thara’s friendship, we might still have that angry loner. We certainly wouldn’t have the great run on the title.

Unfortunately, in the New 52, Kara hasn’t had much of a supporting cast outside of Siobhan, the Silver Banshee. 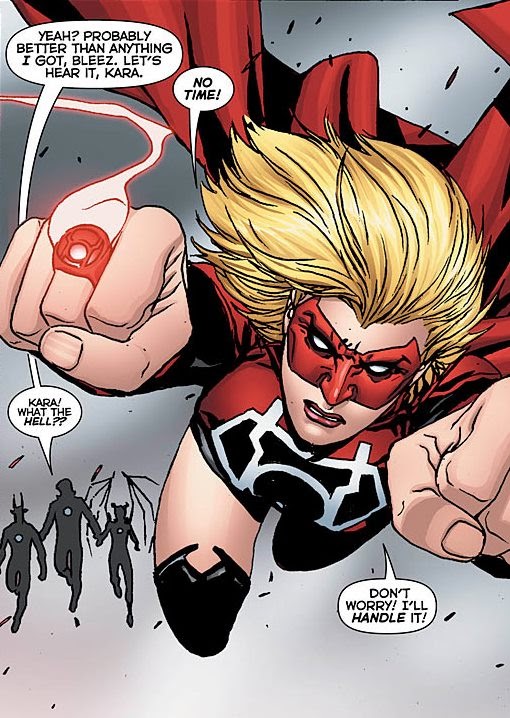 Supergirl has had a complicated history muddled with reboots, retcons and creative limbo. Why do you think this is the case? Is she a “difficult” character to write? Why has she never found her own space and been given the momentum she needs to succeed as a character?

She is a character that has this huge shadow of Superman looming over her. He is perfect. He has the same power set. He is a mentor/older brother figure. He should be a part of her life but he can’t define her.

Her stories have to be more than just Superman stories. They need to be her stories. So writers want to distance her from Superman so she can breathe. But if you have the two cousins not interact at all, it seems wrong. Superman and Supergirl should love each other as family. And you want Kara to not blindly emulate him but to be her own person. But she also needs to be a hero worthy of the S-shield. So I think that tension of freedom from Superman as well as an attachment to the super-family is a fine line. It can’t be easy to balance that dynamic. 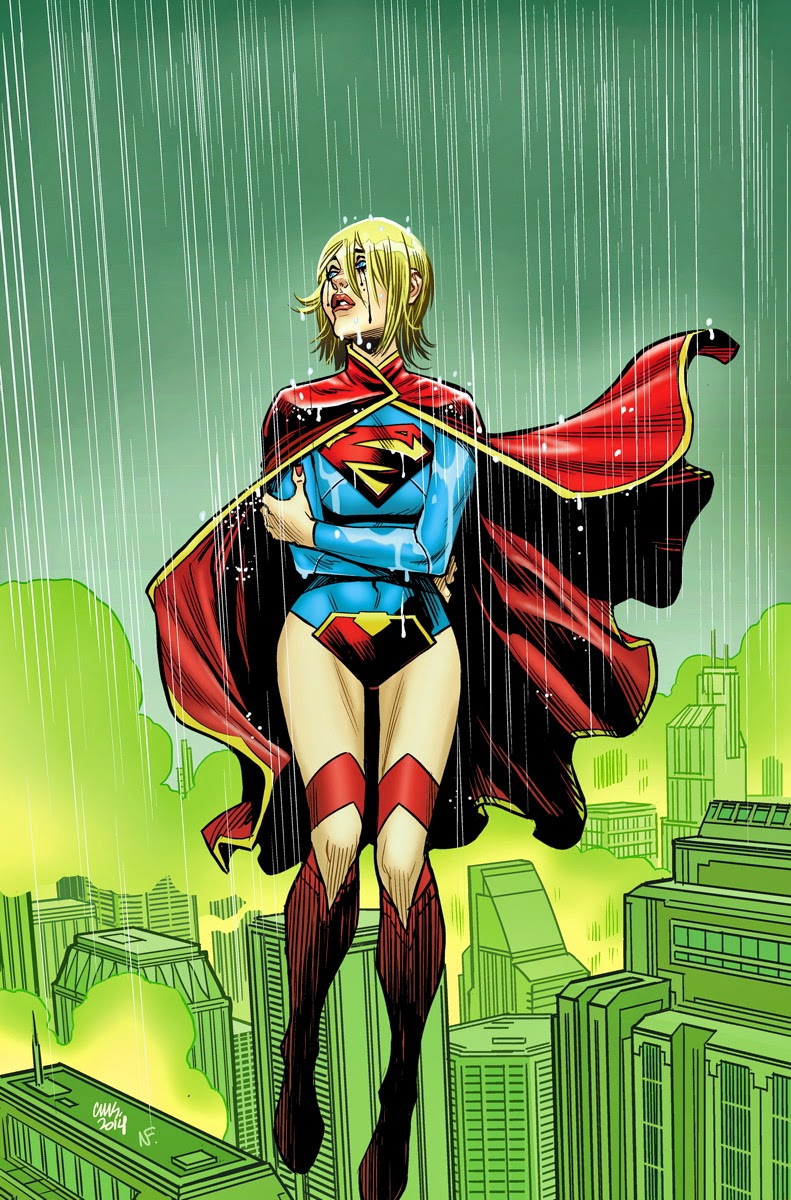 I also think many people think of Supergirl as being the super-saccharine naïve do-gooder from the earliest adventures. They think she is an antiquated happy-go-lucky remnant of the 50s. Nothing could be farther from the truth. DC seems to try to react to that erroneous preconceived notion by moving her as far from that as possible by making her hard and bitter. As a result, those looking for a bright character find a bitter one. And those looking for a bitter character look elsewhere. I think it is tough to overcome those preconceived notions of her being a silly outdated sugary character. And the established Supergirl fans don’t want to read the angry loner.

The truth is she has found space and momentum under the right creators who see her as an eager young hero learning to do what’s right. Paul Kupperberg, Sterling Gates, Landry Walker, James Robinson, and Mark Waid all were able to write excellent stories with her. 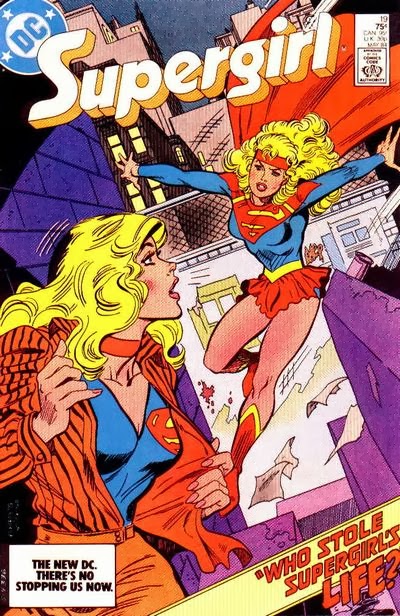 The relationship between Clark Kent/Superman and Kara Zor-El/Supergirl is… complicated, to say the least. They are often depicted as unlikely allies; family and other times are antagonistic to each other. What is your take on their relationship? Why has it suffered over the years?

It all sort of springs from my prior answers. Do you want a Super-family? Or do you want them separated? Do you think the Super-family are inspirational figures? Or angst-ridden?

I want them to be a family. I think of Superman as a loving, caring humanist. He should embrace Kara as family and as a surviving Kryptonian. He shouldn’t be pushing her away. And he shouldn’t simply let her decide to shut him out. Additionally, if Supergirl is mourning the loss of Krypton she should be embracing any connection to the world. And here is her cousin! She shouldn’t push him away either.

He should be a caring older brother figure. She should feel comfortable approaching him for advice… No one has these worries with Batman and any of his sidekicks or mentees. Why it carries over to Supergirl I don’t quite understand. So what do you see yourself more as? A historian; writer; blogger; reader?

I consider myself a long-standing fan. That makes me a bit of all of those things. I do like to consider myself an amateur comic historian though. I love writing and sometimes worry I run on a bit too long with my posts.

Does Supergirl have a rogues gallery? What time period did she have one?

You need to look at the best periods of Supergirl’s stories to see her have a rogues’ gallery (the same can be true of seeing her best relationship with Superman, a supporting cast, etc). No big surprise Paul Kupperberg’s Daring New Adventures run and Sterling Gates’ later run both had villains that are uniquely Supergirl’s. Kupperberg introduced us to Blackstarr, the Gang, and Reactron. Gates gave us Reactron, Silver Banshee, Superwoman, the Insect Queen, and the Dollmaker.

The fact that Banshee was in the Peter David book, the Gates book, and the current book makes me think she is now going to be a Supergirl rogue primarily. 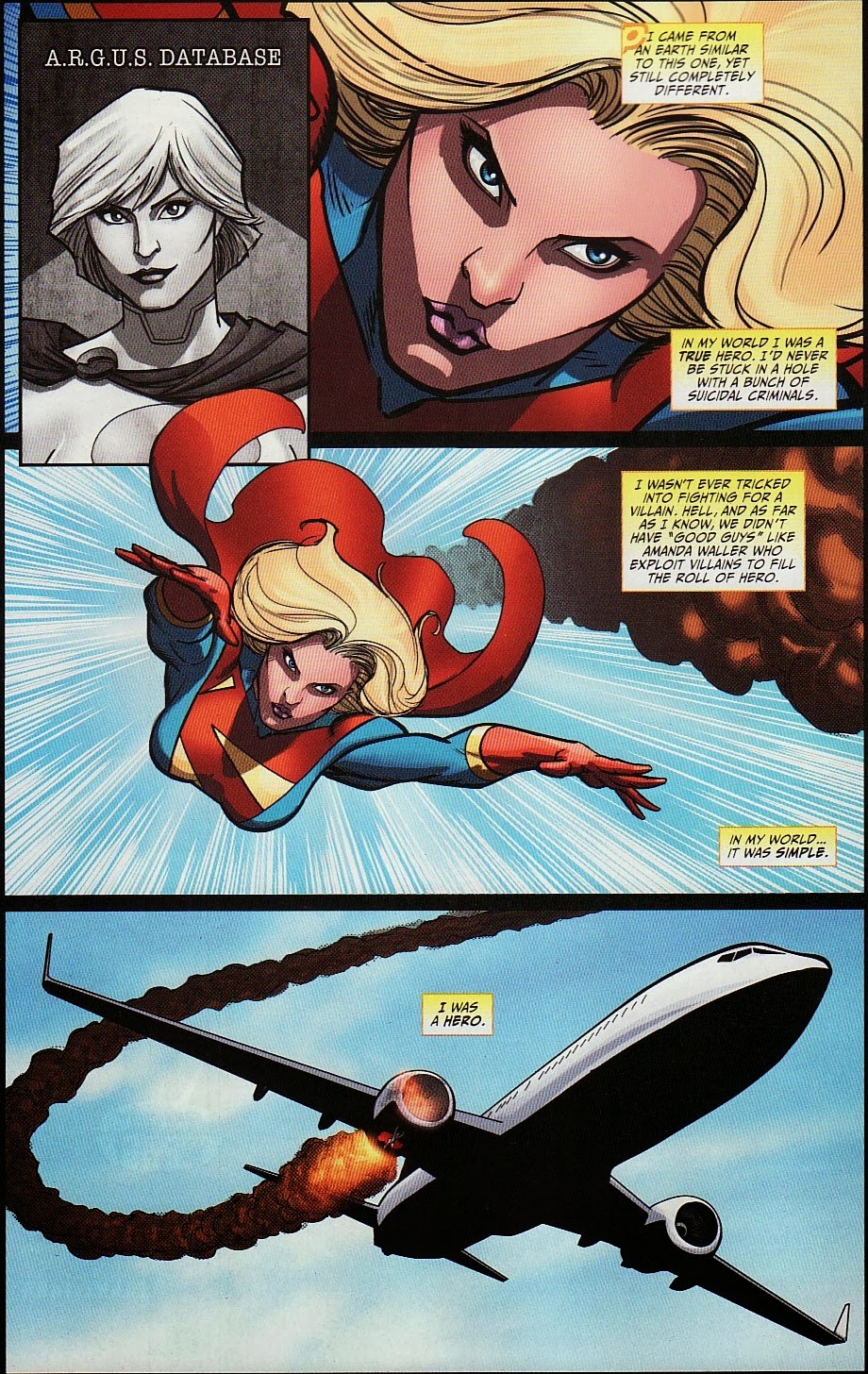 You can find Anj at: