Last week we had the chance to speak with one of fandom’s royal elite, Mr. Kevin Shinick.  The writer/actor/director left it all out on the dance floor, discussing his time at MAD, Avenging Spider-Man, Robot Chicken, and the new animated show Star Wars Detours.  In this very brief first part of the interview, we’ll hear Shinick’s thoughts on his time with Star Wars animation.

UTF: Well, first off I noticed that a lot of the writers that had worked on Episode 2 and 3 of the Robot Chicken: Star Wars were coming over to work on Star Wars Detours […] Do you guys just have a good comfort level that you’re all… working together on this latest show?

Kevin Shinick
You know we do, but it’s funny because people think Robot Chicken, you may think it’s the zaniest goofiest room. And In fact, it’s just the opposite. It’s just the five of us sitting in a room quietly writing our own sketches. How that works then is for like two or three weeks we just sit and write our own sketches and at the end of every day we just hand our sketches in and go over them as a group. Only after all the sketches are chosen and put into an episode, do we work as a team to make sure that the… all the sketches are the funniest they can be. But for a number of weeks (Harrison chuckles) it’s very quiet room as we’re just trying to come up with funny ideas and stuff.

And you know, I think, yes, I think George was great… George Lucas was great in letting us do those specials and then just even more so to be able to work hand inhand with him, to work on this Star Wars Detours, it was just a dream come true. Obviously, we have an approach to his franchise that he liked which is why he asked us to come on board and do this.  The writers started with us but they vary and it’s really a wealth of talent that we’ve really put into this show. So yeah, it may have started with our small group but it has definitely grown. 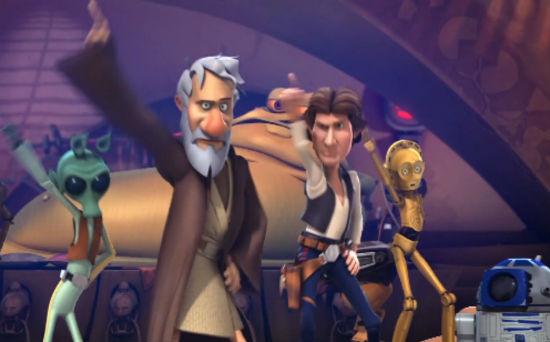 Kevin Shinick
What part, that other people are writing on it?

UTF:   Is there a sketch that you’re working on or a segment that you’re just like, “this is going to be awesome.”

Kevin Shinick You know, the whole idea of it I like. I think what I like most about it without saying too much, because there’s not much that I can talk about really technically on the record. But, what I love about it is it’s the world you know so well featuring a lot of the characters you didn’t know that well, if that makes any sense. In other words, all the characters you’ll see you will have seen at some point in the Star Wars, you know, six movies. But maybe they had one line, maybe they were in the background, maybe they… you know we just kinda shift perspective a little bit more. As you can see in the trailer a little bit, there are some characters there too. All you favorites are there, but people and characters that you may not have seen enough of get their day in the sun.

Come back next week when we dive into a lengthier look at The Avenging Spider-Man and Shinick’s love for comic book lore.