Given Hollywood’s recent love affair with big-budget superhero movies (seriously have you seen how many films are coming out in the next couple of years?), I thought I would help those producer bigwigs out with a guide to several actors/actresses who just scream capes and spandex. Without further ado, I give you 6 Actors Born to Play Superheroes: 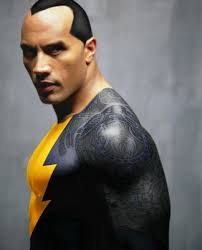 When I began researching for this article I was going to make a case for Dwayne “the Rock” Johnson to play Marvel’s Luke “PowerMan” Cage. That was until I stumbled across the above picture. Though it may be a shoddy Photoshop job, the fact remains that the likeness is uncanny. Give Rocky some pointy ears and extended eyebrows and you’ve got the perfect Black Adam. For those unfamiliar with him, Black Adam is the arch-nemesis of DC’s Shazam (formerly known as Captain Marvel). Granted B.A. is a villain and Dwayne normally shies away from those roles (watch Doom and you’ll understand), the resemblance is too perfect for it to not be exploited. If the pro wrestler-turned-action star doesn’t want to test his “acting chops” by playing the bad guy, he’d still make a pretty good Luke Cage.

For those of you that don’t know, Maggie Q is the superb actress from such films as Live Free or Die Hard, Priest, and Mission: Impossible 3 as well as the hit TV show Nikita. With her sultry looks and martial arts training (check out this fight scene from Naked Weapon), she would make a perfect Psylocke. Elizabeth “Psylocke” Braddock is the resident psychic blade-wielding telepath/ninja-trained assassin for both the X-Men and X-Force (she was also the half-sister of Captain Britain). With both another X-Men sequel and an X-Force movie in the works, finding a place for the fan favorite Psylocke shouldn’t be a problem. Just like Mr. Johnson above, she looks perfect for the role. Also, if DC ever makes an Outsiders movie (or needs someone for a Batman movie), Maggie would also make a great Katana.

The seven-foot tall monster of man known as Nathan Jones has made appearances as basically himself in Troy, The Condemned, and The Protector. Like Dwayne Johnson, he’s a former professional wrestler who decided to takes his “talents” to the silver screen. Unlike the Rock, he doesn’t normally find himself in many speaking roles. Fortunately for him, in the world of spandex-clad superheroes and muscle-bound villains he is a perfect fit. With the right combination of makeup and SFX he’d make a stellar Solomon Grundy. Grundy (who never was much of a talker) is an over-sized, nigh-unstoppable behemoth spawned from the nightmares of Dr. Frankenstein. Being a frequently re-occurring DC villain, they could easily plug Mr. Born On a Monday into a number of upcoming films. From the big guns like Superman and Wonder Woman to the more realistic heroes like Batman and Green Arrow, Solomon Grundy has fought them all (he’s even tested the limits of the entire Justice League a time or two). Throw in the fact that Grundy is a charter member several supervillain teams (Dungeon of Doom, Injustice League, etc.), you have the perfect villain for just about any DC superhero movie.

Bruce Willis, is the man who (along with Sylvester Stallone, Arnold Schwarzenegger, and Jean-Claude Van Damme) epitomized action movies in the 80’s and 90’s. The star of such classics as The Fifth Element, The Die Hard Trilogy, and Armageddon has played almost every role under the sun. He’s even successfully tried his hand at movies based on graphic novels (Sin City and Red). The next logical step would be to step into the boots of a bonafide superhero, the time-traveling cyborg Cable. The time-lost son of Cyclops and Jean Grey, Nathan “Cable” Summers was sent from a dystopian future to help the X-Men battle the godlike mutant Apocalypse. With the time travel plot being used in the upcoming X-Men:Days of Future Past, the chances of an X-film being based on Cable’s origin story are slim to none (though I wouldn’t count out a solo film). But doing the Time Warp is only half of Nate’s contributions to the X-Verse. Cable was also the leader of the first iteration of X-Force and the lesser known mutant group, the New Mutants. With a virtual plethora of X-branded movies being promised, they have plenty of different ways to bring Cable to the big screen and there’s no one more qualified to play the part than Brucey.

From killing Ring Wraiths in the Lord of the Rings films to putting Kevin Costner to shame as a post-apocalyptic drifter in The Road, Viggo Mortensen has earned his place in the hearts of fanboys and fangirls the world over. Now that he’s sporting a snazzy new beard, I think it’s time he added another geekworthy role to his already impressive resume, Marvel’s Dr. Strange. Strange has an origin story that’s just begging for the big screen. As a doctor, Stephen Strange was a world-renowned surgeon until he was in a freak car accident that crushed every bone in his hands. Spending every last scent of his fortune (there sure are a lot of rich superheroes aren’t there?) on a way to repair his famous hands, Strange soon finds himself exploring alternative methods for a cure. Ending up at a secluded Himalayan monastery, the doc learns that not only is magic real, but so are the monsters that go with it. In time he discovers that his true calling in life is not that of  the world’s greatest surgeon, but as the Sorceror Supreme, the world’s greatest wizard. Now tell me that doesn’t sound like a great movie. Throw in a love interest or two, and a healthy dose of CGI and you got yourself one hell of a film.

Now I know what you’re thinking. Lucy Lawless as Wonder Woman, she’s like 50, are you crazy?!? Actually she’s 45, but that’s not my point. I am not here to make a case for the former star of Xena:Warrior Princess (and pinup for the LGBT crowd) to play the everyone’s favorite Amazon in an upcoming film. Unfortunately for us all, Hollywood dropped the ball on this one. A decade ago, when she was just gearing up to battle Psylons in Battlestar Galactica and popping up in everything from the X-Files to the first Spider-Man movie, Lucy would’ve been the prime candidate to play the golden lasso-slinging Wonder Woman in a feature film or ongoing TV series (heck she even voiced Diana in the epic animated movie Justice League: The New Frontier). Ms. Warrior Princess had (and still has) the perfect build and voice to play WW and, when she was tossing her chakram to her infamous warcry as Xena, she even looked like her. Now, unless they want to use a much older Wonder Woman, the closest Lucy will ever come to the role she was born to play would be as Diana’s mother, Queen Hippolyta. On second thought, that’s a fantastic idea.

I hope you have enjoyed my list, and I look forward to seeing what you guys can come up with in the comments. Whether you love or hate my suggestions, or have an idea for my next article, please feel free to leave me some feedback. Trolls are welcome.