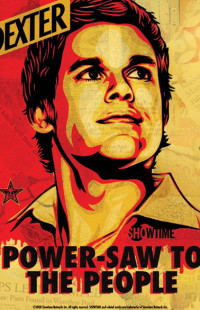 The end has officially begun this week as Dexter returned for it’s final season. When we left off at the end of season 7 it was just after Deb had to choose whether to shoot her beloved serial killer brother or her Captain on the force, guess who she chose. That’s right, she shot her Captain, Maria LaGuerta. Well six months later and Deb seems to be completely down in the dumps, she quit her job, she never answers anybody’s calls, and she’s bounty hunting for some company.

This lady here is Evelyn Vogel, a neuro-psychiatrist who we find out in the last minute that she knows Dexter’s secret. This can mean two things, that because she’s so interested in Dexter it could turn out that she’s the killer, or she could really need the help in solving the case in next weeks episode. But what is most likely is that she’s the person who came up with Harry’s code, it does make sense since she brought it up before Dexter did, but for some reason not a lot of sites have picked up that theory.

But back to the bounty hunter Debra Fett, as i’m calling her. She has ANOTHER boyfriend, but don’t worry, he’s a thief who Deb has to take down. But she didn’t quite get to do that. What I really enjoyed in this episode was the way Dexter let all his anger out and he really lashed out, even on poor Harrison! But he just so happens to murder Debra Fett’s new boyfriend, messing up Deb’s job. Yep, this episode was all about everyone messing stuff up.

But what about Hannah McKay? Well we’ll be seeing more of her in the coming weeks, probably some poison too.

This week’s Dexter return has already began to set up a dark ending to the series, in hindsight, everything’s going to shit. I’m giving this week’s ep a rating of: