No one enjoys actors telling them why they should go watch and enjoy a film more than this reporter. Thankfully, that is exactly what the cast and crew of Captain America: The Winter Soldier do in this exclusive preview.

VIDEO CAN BE FOUND THROUGH THE LINK. 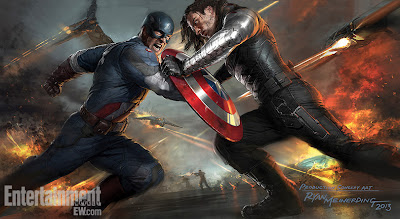 The exclusive preview can also be found on the Thor: The Dark World Blu-ray.

For the first time since the casting of Alexander Pierce in the role of a “senior S.H.I.E.L.D. agent” we get a glimpse into who his character actually is – Rob Redford, former head of S.H.I.E.L.D. who plays what appears to be a morally ambiguous role that fits with the rest of the organization’s “the ends always justify the means” philosophy. Of course, this naturally brings him into conflict with Captain America.

However, the best reveal made in the video is that it shows us how this movie is taking Captain America’s character further, especially with what the new trailers have been showing us about his uncomfortable feelings about working with S.H.I.E.L.D. Kevin Fiege says that this film is “really the continuation of his [Captain America’s] journey in the modern world that he started in the Avengers. The best part for me, though, is the fact that Captain America isn’t taking any of Nick Fury bullshit. Nope. Not one bit.

We also get a good some more screen time with both The Winter Soldier and The Falcon. When talking about The Falcon, Chris Evans tells us that “Sometimes the person you need to trust is a stranger and that’s where [Anthony] Mackie comes in.”

Strangely missing is Scarlet Johansson talking specifically about her character, Black Widow. This isn’t necessarily a bad thing but I think that many people were definitely hoping to see and hear more about Black Widow’s role in the new film.

You can see the actual movie without the shameless self-promotion on April 4, 2014!